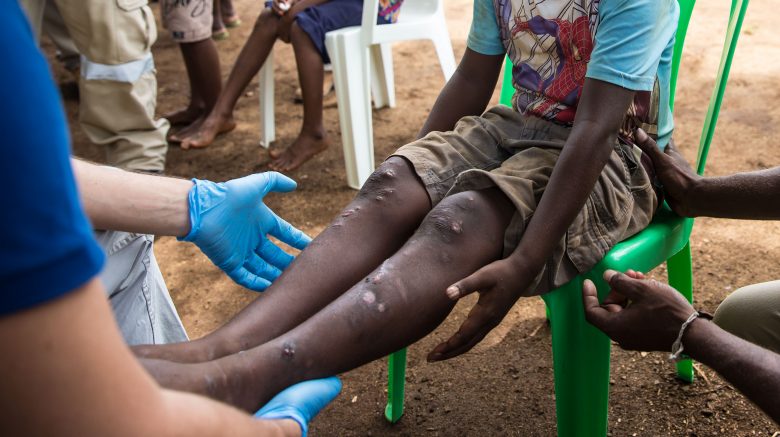 Yaws is a neglected  tropical disease that causes large, painful ulcers all over the body, primarily in the arms and legs. It is caused by the bacteria Treponema pallidum pertenue and, if left untreated, can pass into the bones and cause inflammation and severe disfigurements.

Each year it affects more than 100,000 children between the ages of 5 and 15 in 13 endemic countries of West Africa, Southeast Asia and the Pacific. It manifests itself in the form of painful ulcers on the skin, which are also a means of contagion of the disease. To prevent its spread, affected children cannot go to school or play with other children. Therefore, in addition to the physical impact it causes, the disease leaves emotional sequelae, since the children who suffer from it are stigmatized, and economic sequelae, since the loss of months (or even years) of schooling limits the chances of those suffering from the disease to get out of poverty.

In advanced stages, yaws consumes the cartilages, causing disfiguration, and can affect the bones, generating irreversible disabilities. The disease challenges the development of entire communities, as adults who become disabled become an economic burden for their environment.

Yaws shows the existence of a circle between disease and poverty, according to which both components feed each other.

The World Health Organization (WHO) has made a list of 18 diseases defined as “tropical” and “neglected”. What does this mean? It means that these pathologies affect people living in rural environments (particularly vulnerable) in tropical and subtropical countries. On the one hand, the people affected live in conditions that favour the emergence or spread of diseases (lack of access to drinking water or sanitation, overcrowding, proximity to domestic animals and livestock…). In addition, these people do not have the resources to pay for a treatment, nor the ability to claim their governments to take care of it. This makes them forgetful, and excludes them from a system of research and innovation strongly dominated by the market logic. If it affected people with purchasing power, yaws, along with other neglected tropical diseases, would have been already eradicated.

In the WHO list there are 5 other diseases of cutaneous manifestation (that is, manifested by the appearance of signs on the skin) that are disabling like yaws: Buruli ulcer, leprosy, cutaneous leishmaniasis , tropical lymphedema and mycetoma.  In total, neglected tropical diseases affect more than 1 billion people each year.

The discovery: a new treatment against yaws

Until recently, the only treatment for yaws was penicillin administered through injections. The administration of penicillin requires several components (syringes, needles, plastic gloves, water…) that make sending the material to remote areas very challenging. In addition, only qualified personnel, who do not abound in yaws endemic areas, can administer the injections. Finally, it should be noted that it is a painful treatment, which makes it difficult to apply to children. In 2012, Dr. Oriol Mitjà, a researcher at the Fight Against AIDS Fundation (FLSIDA), discovered that a single dose of azithromycin eliminates the disease from the body in a quick, painless and affordable manner. The cost of this new treatment is one euro per person, which includes the purchase of the antibiotic and its distribution. Azithromycin is an antibiotic used for infections of the respiratory tract, very common in our pharmacies.  In parallel, Oriol Mitjà established a diagnostic method that allows to easily and quickly identify the presence of the bacteria that causes the disease. The research led by Dr. Mitjà stimulated the World Health Organization (WHO) to launch a campaign to eradicate yaws, which makes it the candidate to become the second human disease ever eradicated from the planet (after smallpox).