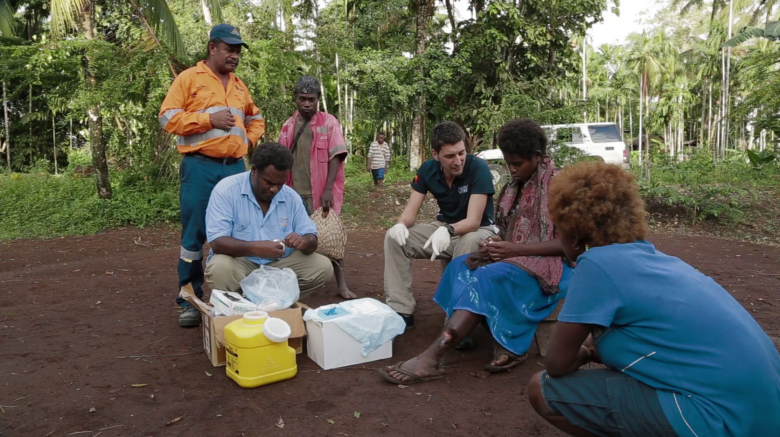 Genome sequencing has shed light on the re-emergence of the bacterium that causes yaws.

Researchers at the Fight Aids and Infections Disease Foundation (Badalona), the Wellcome Sanger Institute, the London School of Hygiene & Tropical Medicine the University of Washington and the University of Papua New Guinea, report their findings today in Lancet Microbe. The results will influence the global elimination strategy for this disease.

Yaws, caused by the bacterium Treponema pallidum subspecies pertenue (TPP), can cause chronic disfigurement and disability. Most commonly affecting children, infection with the bacteria results in stigmatising and debilitating ulcers. Despite global efforts, yaws remains common in tropical areas in some of the world’s poorest countries, affecting millions of people. The World Health Organisation (WHO) is currently carrying out campaigns to eradicate yaws using Mass Drug Administration (MDA) of the antibiotic, azithromycin.

An MDA campaign on Lihir Island, Papua New Guinea, in 2013 reached 83 per cent of the population (15-18,000 people) and was initially successful, dramatically reducing the incidence of the disease. But after two years, cases of the disease starting increasing. Molecular testing showed the bacteria were of a single type, however it was unclear if the re-emergence had a single source, or several. In addition, a small proportion of the bacteria were found to be resistant to azithromycin, the first time any such resistance had been seen. In this new study, researchers sequenced the genomes of bacteria from 20 swab samples taken during the follow up of the MDA campaign in Lihir, to further understand the re-emergence following the MDA and inform future strategies.

Even though an impressive 83 per cent of the population were reached with antibiotic treatment initially, there were several instances of re-emergence of the bacteria. The development of antibiotic resistance is worrying, but the fact that it only occurred once after a mass drug administration is positive news. We still need to be very concerned about resistance, but it may be possible to manage it. These results have big implications for how yaws elimination campaigns are run – we can recommend high treatment coverage initially and there needs to be careful surveillance and follow up to detect and swiftly treat any re-emergence, to prevent the bacteria spreading.

Yaws is one of many neglected tropical diseases, which combined affect around one billion people – usually in low- and middle-income countries. They are often diseases of poverty, affecting rural communities without access to sanitation and basic healthcare.  WHO has laid out a new roadmap for the control, elimination and, in the case of yaws, eradicating these conditions over the coming decade.

Dr Oriol Mitjà, senior author of the paper at the Fight Aids and Infections Disease Foundation and the Lihir Medical Center, in Papua New Guinea, states: “While yaws doesn’t kill, it causes significant disease in thousands of children around the world. Yet it is easily treatable. Following up on treatment trials is vital – we need to know where and why the bacteria are re-emerging. The results from this study are influencing the next steps and approaches we take to eradicate this disease.”

This site uses Akismet to reduce spam. Learn how your comment data is processed.